Castles in the Snow

The snow that was rumored to be coming to San Francisco this past weekend never arrived.

Frost did blanket our neighborhood across the bay, killing a squash plant we planted in the garden too early. The rest of the garden is hanging in there so far.

Since I'm an optimist, I'm using the bummer of a dead plant to contemplate happier snowy times. I didn't grow up with snow, so I get excited each time I have the opportunity to visit it. That's one of the reasons I like to vacation in cold places during the winter.

Dunnottar Castle sits on on an eastern cliff overlooking the sea along the lower Highlands of Scotland. Because of its location on a cliff high above the ocean, the castle was once a well-protected fortress that could only be accessed via a steep walking path. Today the same path leads visitors to the historic site. Only now, the castle lies in ruins. 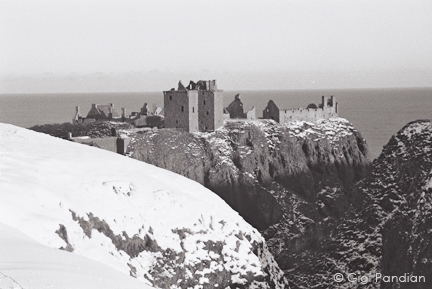 Visiting the Dunnottar Castle ruins after a snowstorm was one of the most inspiring trips to a monument I've experienced. It's a good thing it required so much hiking to get there; otherwise I probably would have frozen. Since I survived without any effects that a cup of tea couldn't cure, the castle's cliffs became one of the settings in the mystery novel I began to write shortly after that winter visit. 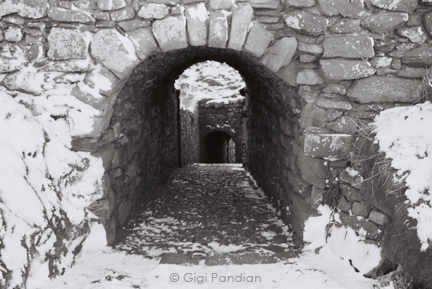 The grounds are full of mystery even when it isn't snowing. Between the fierce sea, the jagged cliffs, and the stone structures that await you at the summit, it's enough to inspire the imagination at any time. 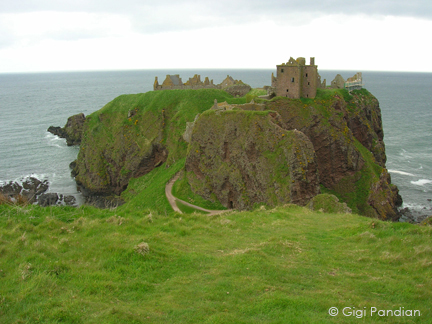 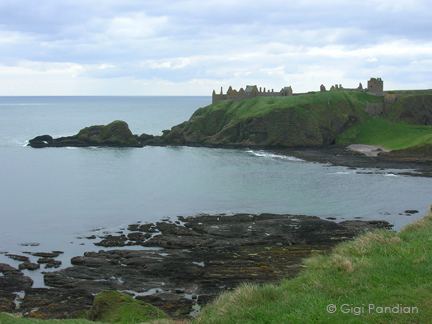 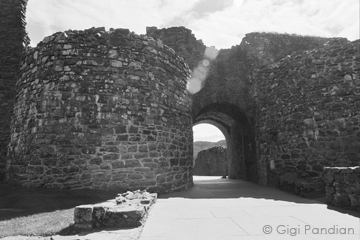 It's especially fun to visit the ruins when the site isn't crowded, but that also means putting up with the off-season weather. During the trip where I took the non-snowy photos above, the wind nearly blew me over on several occasions as I hiked the coastal path along the cliffs.

I learned an important lesson that day -- fingerless gloves are a great friend to the photographer.

In honor of Presidents' Day today, I'm returning to gargoyles of the United States.

In my first post last month, I gave a teaser photograph of a broken statue from the Brooklyn Museum sculpture garden (formerly the Frieda Schiff Warburg Memorial Sculpture Garden when I first visited, now called the Steinberg Family Sculpture Garden).

This is a garden where massive stone carvings live after being rescued from buildings set for demolition. I love that there's a place where gargoyles, grotesques, chimeras, green men, and artists' sculptures of all kinds can be saved when their buildings can no longer survive.

The first two photos below are from my first visit to this garden in the 1990s, when the landscape was more overgrown and haphazard. It was pouring rain (I always seem to travel off-season) and tendrils of ivy and weeds curled around the stone figures. 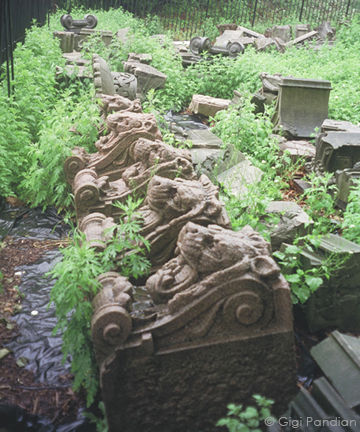 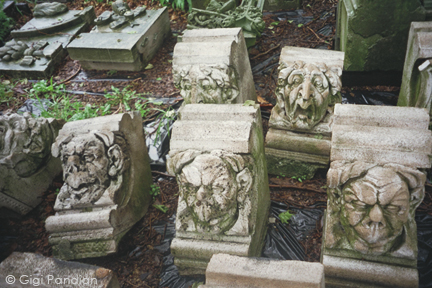 When I returned a few years ago, after the garden was redesigned in the year 2000. The grass was no longer overgrown, and many of the statues I remembered were nowhere to be seen. There were still some fabulously detailed carvings, like the two faces below. 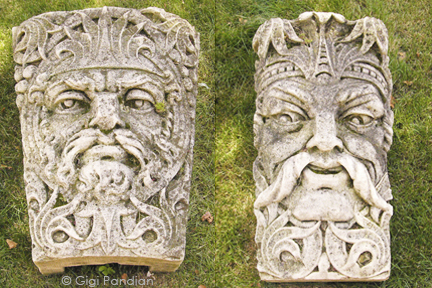 I'll be headed back to NYC this summer, to attend Thrillerfest for the first time. I'll be sure to slip out for a few hours to go back to this sculpture garden to see what it's like today.

Lastly, here's a gargoyle who's even closer to home -- a new little creature we installed in our backyard last weekend. He seems to have survived the hail storms this week, so I think he's here to stay. 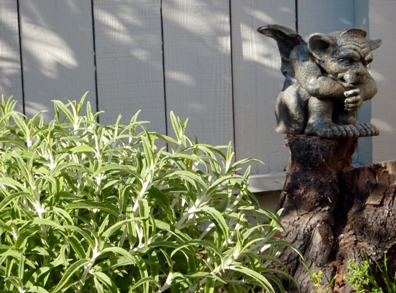 The statue that sits at the center of Piccadilly Square in London is commonly referred to as Eros -- the Greek mythology counterpart to Cupid.

But the statue was actually intended to be Anteros, Eros' brother, so this may or may not be a love bow in the photos below. But it's a lovely statue all the same. 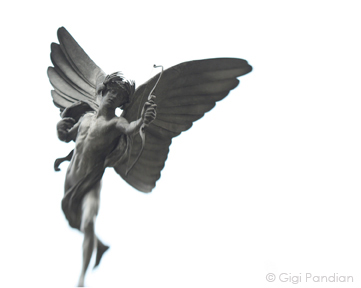 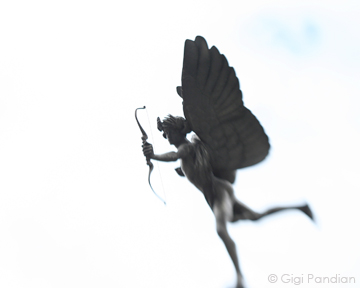 And while this little fellow isn't Cupid either, here's a cherubic angel from the Brompton Cemetery in London. 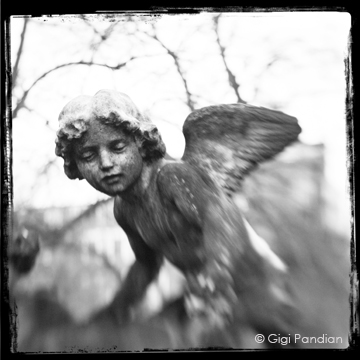 In the 1700s, the city of Edinburgh, Scotland was an overcrowded town on the cusp of the Industrial Revolution. To create more space, they decided to build down.

The Vaults were originally meant to hold the extra merchandise of businesses, but soon people were living in the dark, airless spaces. Lack of light, ventilation, and sanitation quickly took its toll. Within a few decades, the vaults became uninhabitable. The city filled in the underground caverns, and tried to erase their existence -- along with everything that had happened there.

Legend has it that the famous body snatchers of Edinburgh used the underground vaults. It's no wonder that when the vaults were rediscovered in the 1980s, a series of ghost stories followed.

A few years ago I attended Ghost Fest in Edinburgh, during which a series of tours lead groups through the vaults at night. Some of them used costumed assistants to jump out and scare people, but others relied on the chilled air and squeaking hinges that exist on their own.

Guess which one was more frightening?

As a mystery writer and a fan of mysteries of all kind, I do love hints of the macabre. It's the hints that are the most fun.

Below are two photos of Edinburgh that use light to show the mystery of the city. 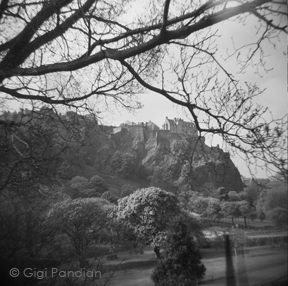 Edinburgh Castle through the trees, taken with a Holga plastic camera. 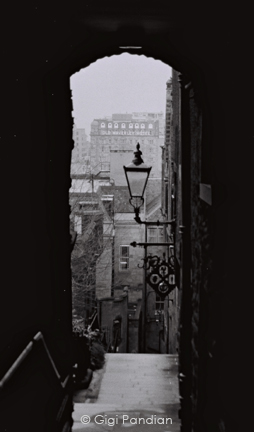 An Edinburgh Close, a small alley leading downward. I wonder where it leads...
--Gigi
Posted by Gigi Pandian at Monday, February 07, 2011 5 comments: