I'm home from the Left Coast Crime mystery convention in Santa Fe, New Mexico. I only brought my point-and-shoot camera, so initially I wasn't thinking I'd post any photos from Santa Fe. But then I remembered my own advice that the camera itself is much less important than what you see through the lens. And I did see some very cool things in Santa Fe.

The angel sculptures in Santa Fe weren't the typical type of angels I photograph in cemeteries, but I found them intriguing all the same. Here are a few of them below:

The Long and Winding Road -- And a Castle Staircase, Too

I'm oh-so-close to finishing this draft of my latest mystery. The good news for my hopes of finishing the book in a timely manner is that I'm heading out to Left Coast Crime, a fabulous mystery convention where I'm sure to be inspired by mystery authors whose books I love -- and who I only know about because they managed to let themselves type "THE END."

Winding roads and labyrinthine staircase photos are in order for my current state of mind: 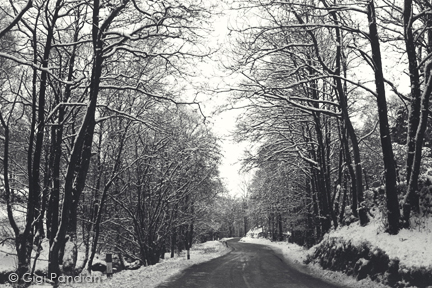 The middle of nowhere (officially)
AKA the dead of winter in beautiful Cornwall, England 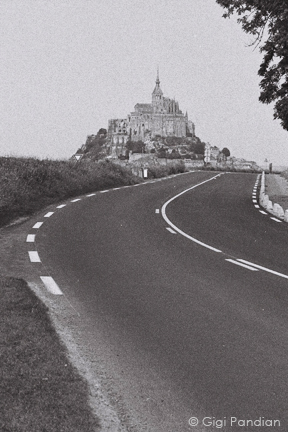 Mont Saint Michel, France
One of my favorite mystery novels of all time takes place at Mont St. Michel along the Normandy coast in France: OLD BONES by Aaron Elkins. The tides that surround this fortress set the scene for the mystery featuring "skeleton detective" Gideon Oliver.

As you can see in the photo above, the island can be reached by a narrow man-made road that sits above the tide. But it's much more fun to think about the quickly-rising tides that cover the quicksand that surrounds most of the island. And when you're on the island looking out at sea through the fog, it's easy to imagine a time when the tide would trap you on the island abbey. 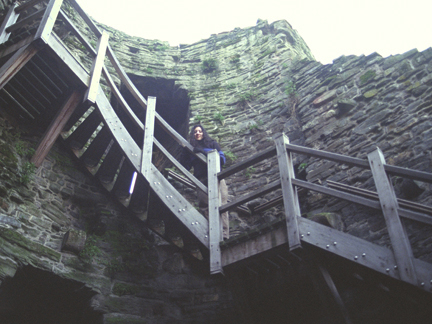 A castle in Wales with winding staircases to nowhere.
(I know, I know, I wanted to do this blog so I could organize my photos, and "castle in Wales" is hardly descriptive. Promising to post photos is definitely helping, but I've still got some gaps in my notes)
--Gigi
Posted by Gigi Pandian at Monday, March 21, 2011 No comments:

I've been having trouble finishing this draft of the manuscript I'm working on. It's the draft that counts. Not my beloved first draft where I'm having fun exploring ideas and characters and plot twists, or even the enticing second draft where I'm putting the pieces together and can see them take shape. No, this is the one where I have to make all those ideas work, and the one I'll be sending to my agent in a short time.

I can almost see the light at the end. Almost.

To help me get there, I've got some photos I've taken of passageways. These remind me that it's the journey that counts -- and that yes, I will indeed get to that end. 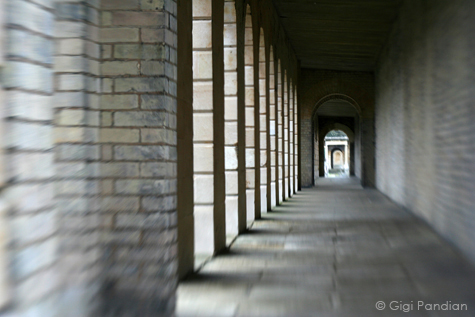 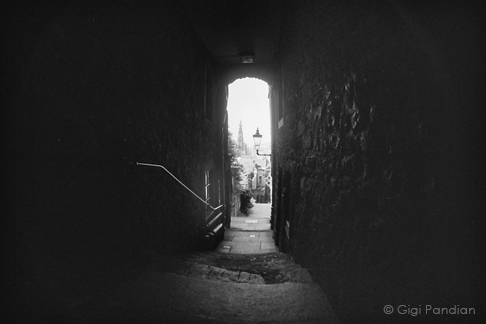 An alley in Edinburgh 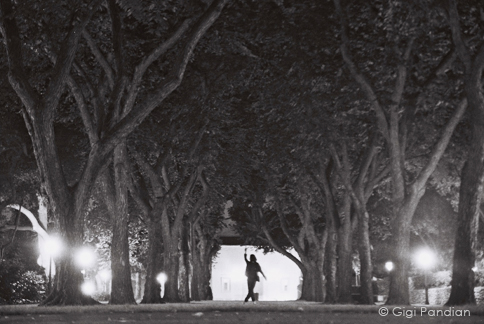 A grove of trees at the Claremont Colleges 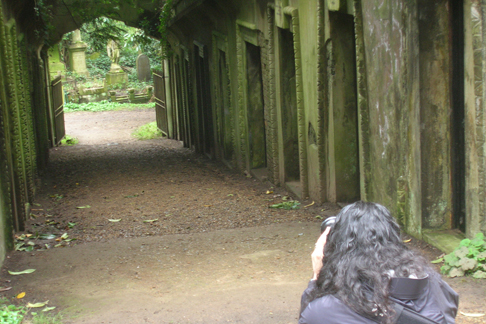 I didn't take this last one -- it's a photo of me taking a photo of a cemetery passageway.
--Gigi
Posted by Gigi Pandian at Monday, March 14, 2011 No comments:

Last week in a Pens Fatales blog post I posted a photo of one of the walls in my office (below). I was talking about music at the time, so the point of the photo was to show the guitar I've got hanging up on the wall -- but it got me thinking about how much I love my brick wall. That brick wall inspires my creativity much more than the drab cream-colored walls that form the rest of my office. 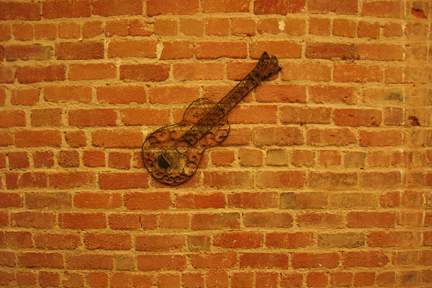 I love classic detective fiction from the early 1900s in part because of the evocative imagery that goes along with so much of that pulp fiction -- e.g. shadowy figures in the dim lamplight of seedy alleyways set against brick walls.

One of the coolest brick buildings that has a lot gargoyles hiding among the brickwork is Hampton Court Palace, right outside of London. Most of my favorite castles are those that are in ruins, but Hampton Court Palace has enough mystery as it is. It even has a life-size maze.

Below are a some of the more interesting creatures that inhabit the brick walls of the palace. 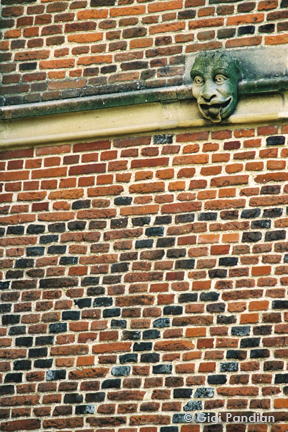 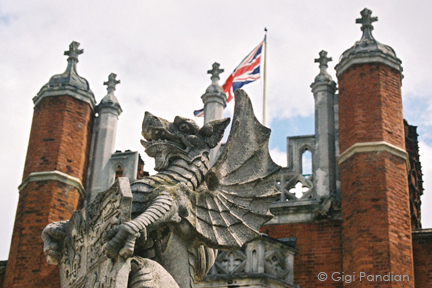 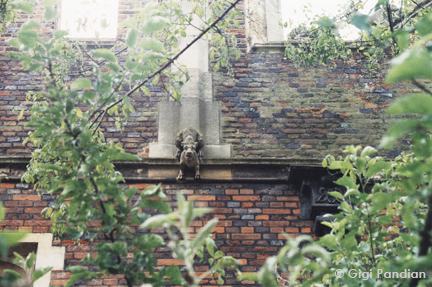